For the last week of September Mega Marathon, with Buffet on the Table I shall share some of my travels with you. While travelling, my focus is always on the cuisine and food served in those places.

Rich in history, the center of Marwar is one of the most vibrant places to explore. Music, food, art and language blend in perfectly to gives one a lively experience that is very distinct to this region. I have always loved the Rajasthani culture and food, infact I have always had good Marwari friends and am well versed with their culture.
When it was time to do my room, I wanted to get furniture from Rajasthan. We visited Jodhpur , but the visit was too short could only manage to finish our work and have a typical Rajasthani meal at Ummaid Bhavan Palace. It was a meal where we had Gatte ki sabzi , ker sangri , flavors still linger. This was more than 20 years back.Ever since Jodhpur was on my travel wish list. It was only recently that we planned this trip with family and friends. 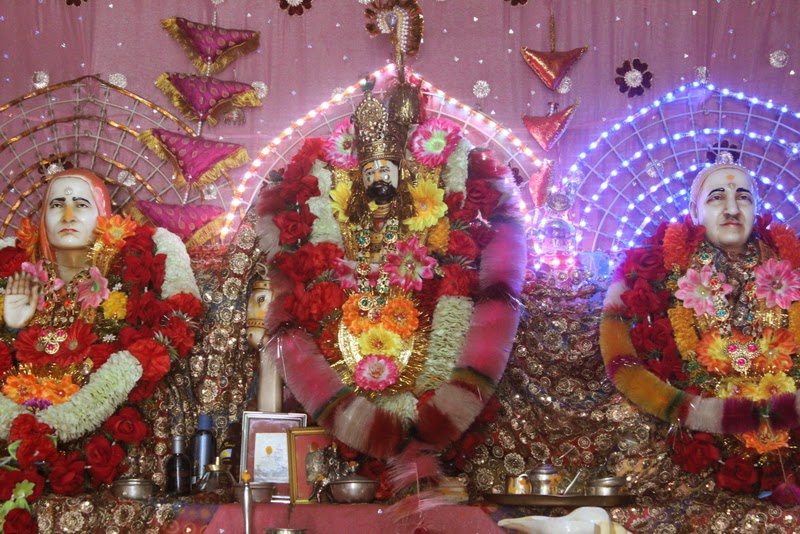 We traveled by road and the journey was about 6 hours from Ahmadabad. We were welcomed by a family who are very religious and have a temple . The head of the family is a Guru and is famous as Bhau. Our first meal was a lunch prepared by the family members, but it included Pyaz ki Kachori which is one of the most popular street foods there.
Which ever city I visit my first choice is the street food. Jodhpur too had a evening and night eatery joint . The place had different carts selling all the possible street food, from all over India. They had dosas, Chinese, sandwiches, wada pav, pani puri, the only different stall that I saw was the Indian Ice Gola. They drizzled the rose syrup , then rabdi on top, which was different than our usual Ice Gola! 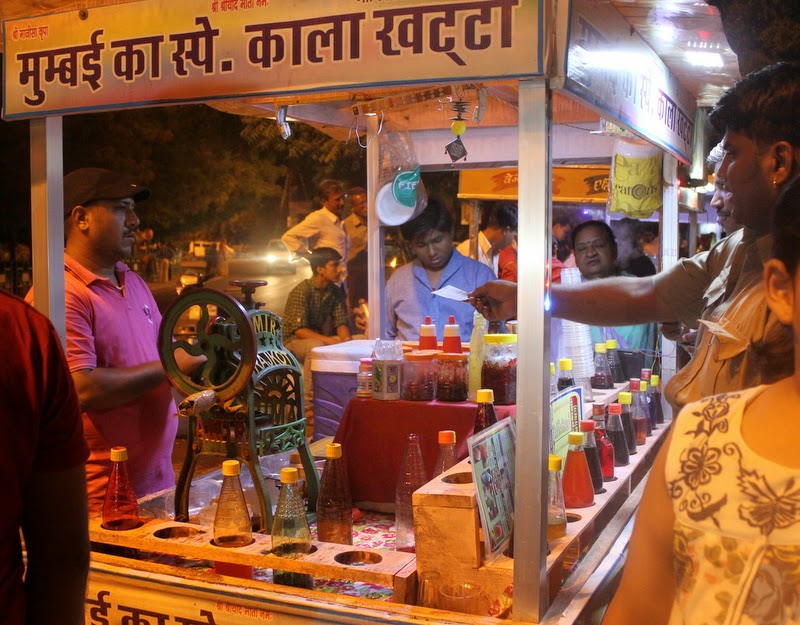 My hubby told our hosts that I was into food blogging and that was enough , they made sure that my knowledge on Jodhpur Cuisine was enriched.Yes I have yet to see such hospitable family. The very next day they took me to a dhabba,which was very rustic and perhaps I would never go there without a male escort. It sold Kabuli Pulao along with different Rajasthani dishes. They had koftas which were totally new to me. Gulab Jamun kofta! ..yes gulab jamuns were fried and immersed in a very rich gravy. I was told that they had a special Masala Papad. It was a huge Bikaneri Papad, which was roasted and then dipped into the oil . Wait, this oil was the oil which floated on top of a gravy. I wondered if I could ever dream of cooking with so much oil, but I have to admit the Papad tasted absolutely wonderful and delicious. 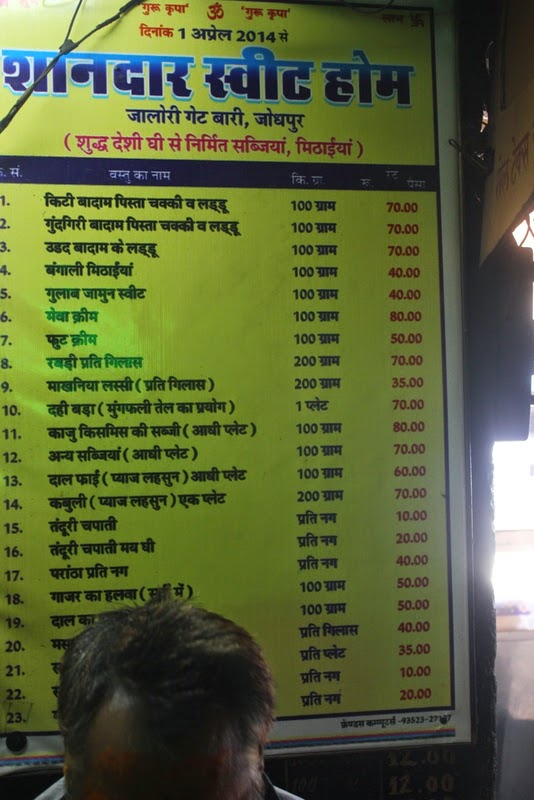 This is the menu of that Dhaaba and below you can see the Bikaneri Masala Papad, Gulab Jamun Kofta and a glimpse of the Dhaaba 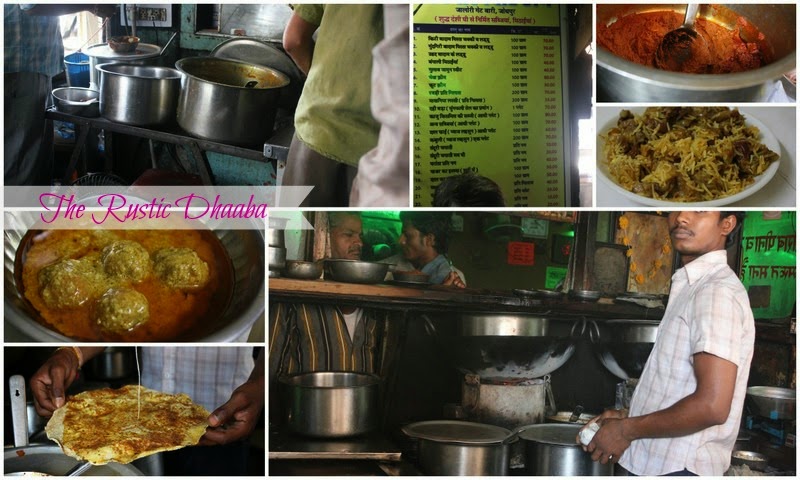 In the evening we went around the market and did some shopping, but amidst that we saw Samosas and Mirchi wadas.The Mirchi Wadas and Samosas are available at very nook and corner, but I was impressed by Shahi Samosa House.

Non stop hands work on stufing the Mirchis and then stocking till required to fry. 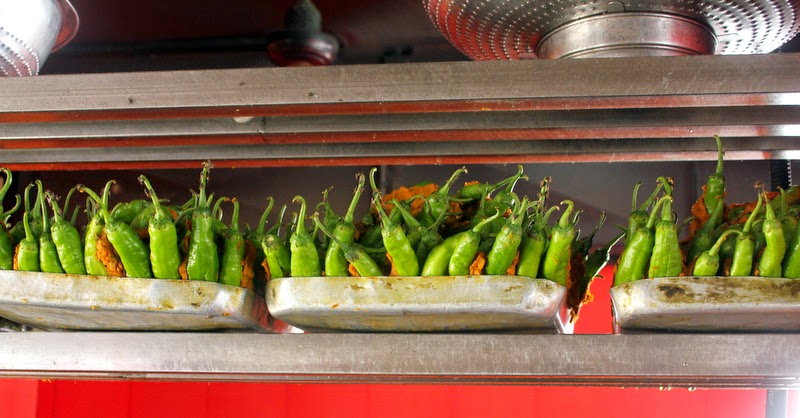 The kachori stuffing being made into balls and then filled ! 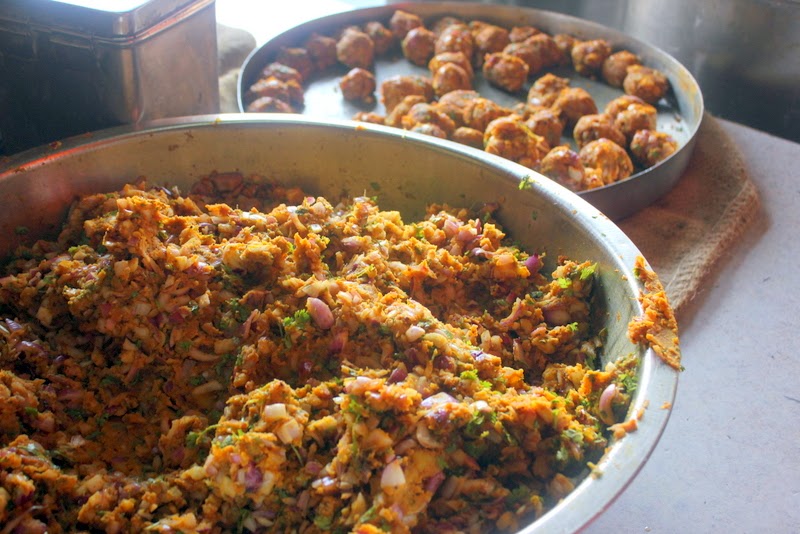 Now what do you say to this?..Awesome Kachoris!! 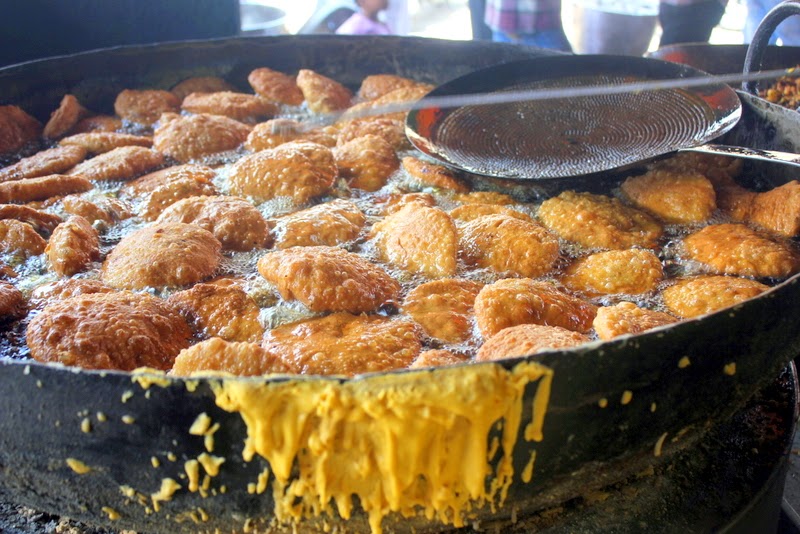 The procedure of making samosas. 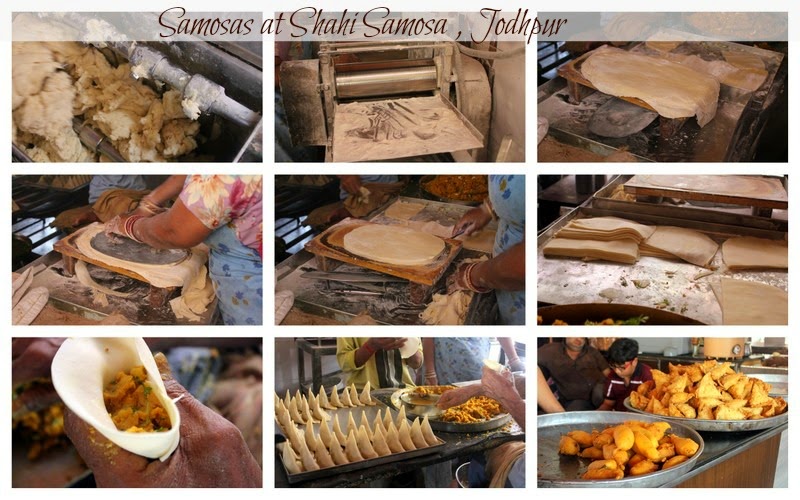 I was amazed at the crowd at that samosa wala. The guy said they sold more than 3000 samosas. The shop has been there since ages. As soon as I started clicking the owner himself came out and started conversing with me. He was very polite and explained me how they worked and even gave his samosa recipe. They had a staff of more than 50 people, whose hands worked non stop. Their samosa size was also massive.  The samosas here are on the tarty side,as they use lot of citric acid.After I finished clicking I thanked the guy who in return packed samosas and Kachoris in a big box and requested me to accept as a token. I was very hesitant, but the owner insisted …atithi devo bhava. For Rajasthani’s guests are like God. Humbly I accepted the packet. Thank you Shahi Samosa House! 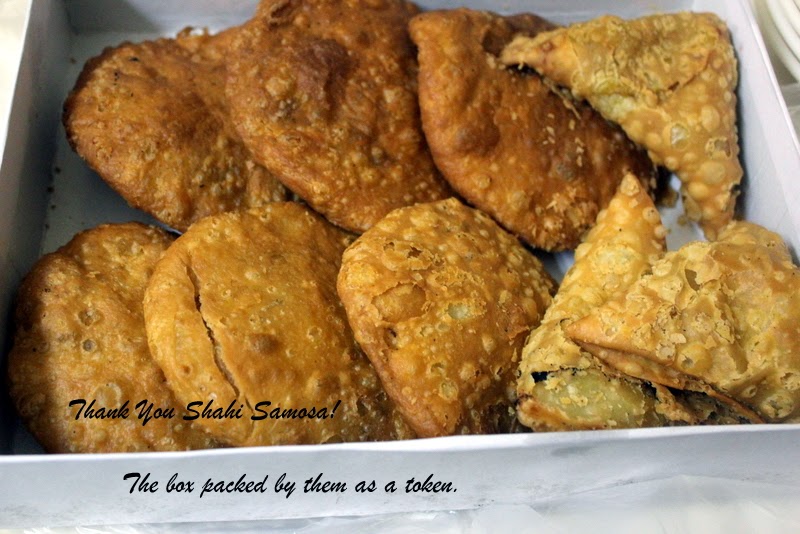 We headed home and later in the evening went out for dinner . Our hosts insisted we go to a nice restaurant, we did go , but I could’nt eat my dinner as the Samosas and Kachoris still ruled my tummy. 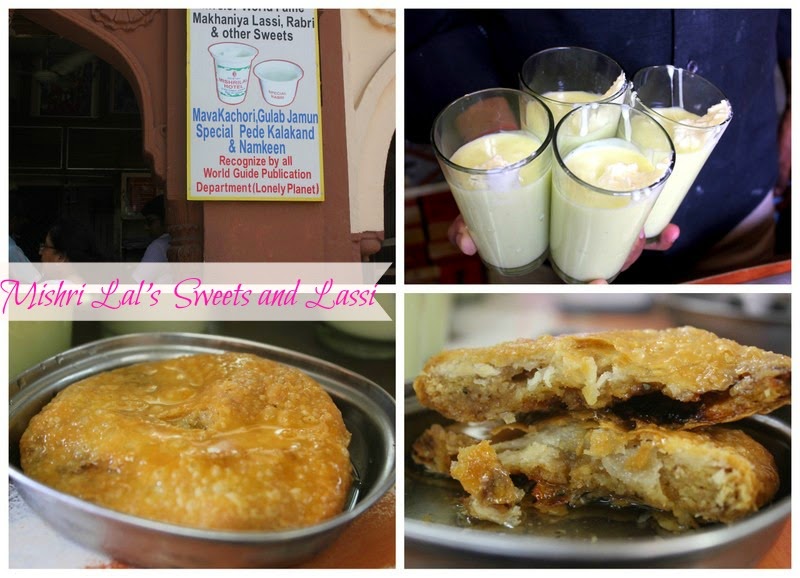 Next day I was keen on checking out some more foodie places. We went around the city and I was told that there was a special lassi , called Makhaniya Lassi and a sweet kachori which was sold at Mishri lal. This place was very busy , I wanted to ask the details of the lassi and kachori but these guys were very busy and could not talk at all . I am not a sweet lassi person, I had just one sip, but my friend loved it . I liked the kachori there it had a mawa or khoya filling, with syrup. 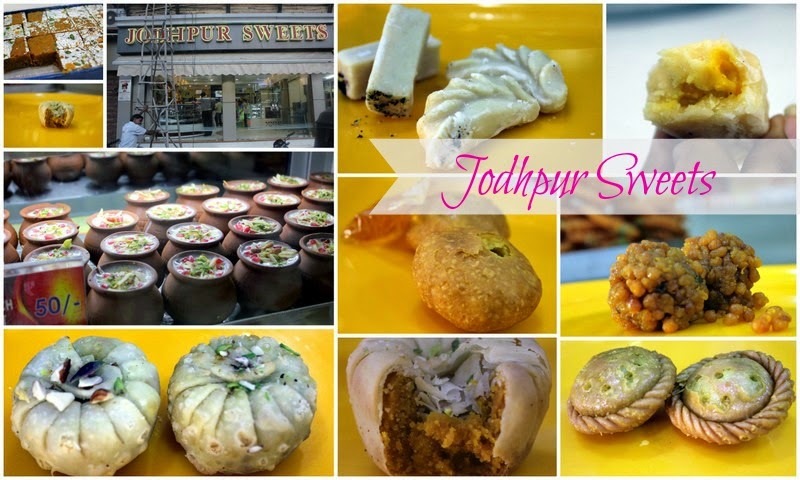 Then came the most famous Jodhpur Sweet House. This was right next to our hotel and I loved the sweets sold there. I wanted to taste all the sweets, but it was not possible, so I tasted a few typical ones. The Ghevar is very popular here , the Besan ki Chakki, Makhan wada was amazing.
For dinner we went to a place called Gypsy Restaurant. The restaurant belonged to our hosts friend , so we were really taken care of. They had all the fast foods, plus they had a Rajasthani Thali which was very very elaborate. At that time I wished I had one extra tummy. The amount of dishes they served us was amazing, I prepared the Rajasthani Jodhpuri Thali on the lines of the Thali served at Gypsy.
Ummaid Bhavan Palace is a place which I was very keen on visiting, since I have always been interested in architecture of india and Rajasthan has beautiful historical architecture and Umaid Bhavan Palace of Jodhpur is noted for its imposing architectural features. Chittor sandstone has been used in the construction of this palace which imparts a special effect on it. The architecture of the palace was designed by a British The main features of architecture of Umaid Bhawan palace is beautiful balconies, green gardens, charming courtyards, and stately rooms. At present the palace has been converted into a heritage hotel and a royal museum.
The Mehrangarh Fort majestically perched on a rocky mountain, at a height of hundred and twenty meters looks down on the city below. The architecture of the fort is very impressive and it is one of the largest forts in India. The fort wall has seven entrances and a number of palaces within, all connected with courtyards. The structures with their Bengaldar roofs bear a resemblance to the Bikaner Palace and have a strong influence of Islamic architecture.
Well this was our trip to Jodhpur , which was a beautiful trip, where I explored the city for the foodie I am . Hope you enjoyed this travel with me. 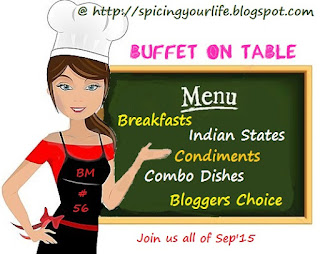