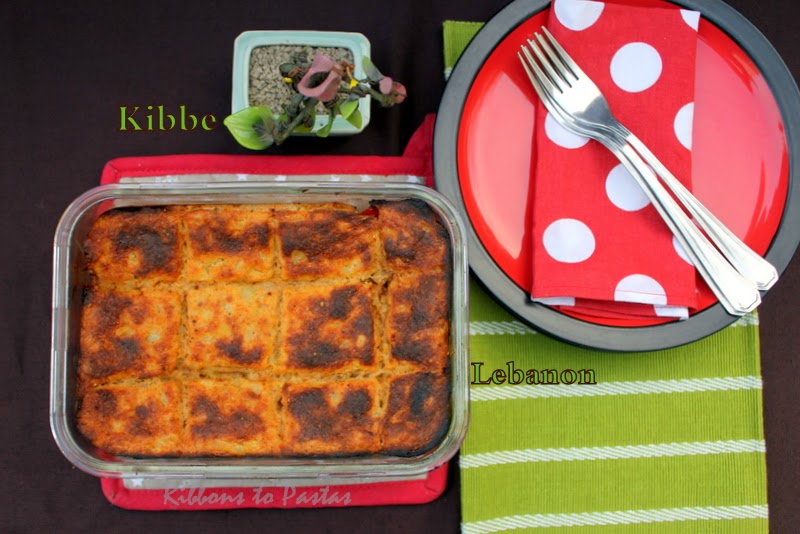 Lebanon
Country
Lebanon, officially the Lebanese Republic, is a country in Western Asia. It is bordered by Syria to the north and east and Israel to the south. 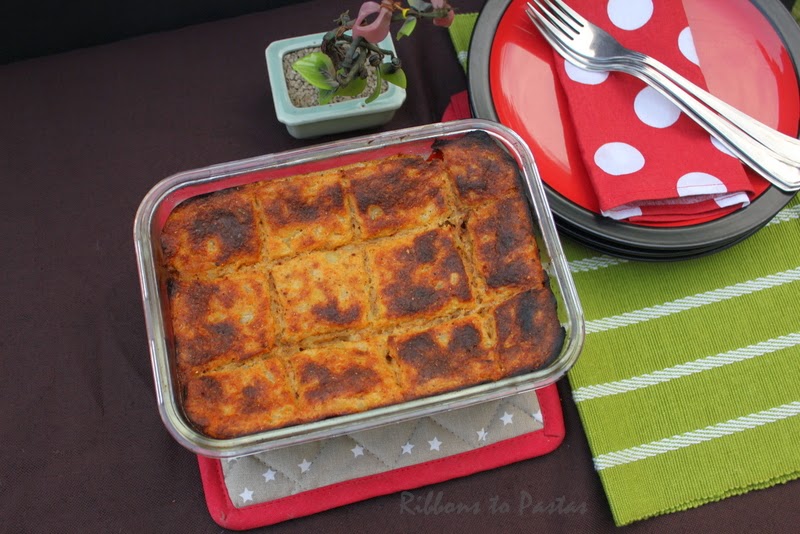 Today we are in Lebanon, and we all are aware of this delicious Middle Eastern cuisine. We all know about their falfels and hummus, their delicous Mezze platters. I am sure most of us have relished their cuisine as it is available all over the world.
Bread, a staple food in Lebanon, is served with almost every meal, most often as a flat bread, or pita. It is so crucial to the Lebanese diet that some Arabic dialects refer to it as esh , meaning “life.”
The Lebanese diet focuses on herbs, spices, and fresh ingredients. Mint, parsley, oregano, garlic, allspice, nutmeg, and cinnamon are the most common seasonings.


Mezze , a variety of flavorful hot and cold dishes, is another important part of the Lebanese diet. As many as forty small dishes are presented at once as either appetizers or as a meal itself.
Fruit, vegetables, rice, and bread out-weigh the amount of meat eaten in the average Lebanese meal. However, the most commonly eaten meats, poultry and lamb, make up some of the country’s most popular dishes.
Lebanon’s variety of fresh fruits makes them popular after-dinner desserts. Melon, apples, oranges, tangerines, persimmons, grapes, and figs are great treats. Baklava , a sweet, flaky pastry, is usually associated with Greek cuisine. However, the Lebanese have embraced the dessert and normally prepare it with pistachio nuts, drizzled with rose-water syrup .
For today I have prepared Kibbeh, which is a National Dish of Lebanon.
The national dish, kibbeh (or kibbe ), consists of a ground lamb and cracked wheat paste, similar to paté. Kibbeh was originally made by harshly pounding the lamb and kneading in the spices and wheat. Those who were unfamiliar with this practice often found it quite unpleasant.With the advent of the electric grinder and food processor this ancient method of kibbeh-making has all but stopped.

Kibbeh is made in many ways. I have made the Baked kibbeh , which is layered in a pan with its stuffing and drizzled with olive oil, while fried kibbeh is shaped into miniature hollowed out footballs and then stuffed before being fried. 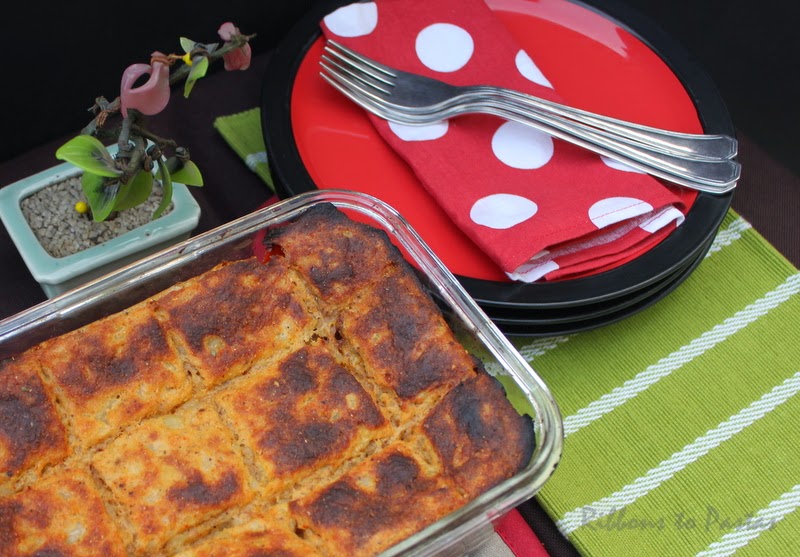 3 large boiled potatoes or 4 cups
1/2 cup flour
1 cup bulgar wheat
2 tbsp Bhokharat spice
1 tsp cayenne pepper
1/2 cup chopped green pepper
1/2 cup chopped red pepper
1/2 cup chopped onion
1/2 cup pine nuts
1/2 cup walnuts
1/2 tsp black pepper
2.5 tsp salt
1 tsp seven spices
1 tsp sumac
Olive oil and olive oil spray
Rinse the bulgar and then let sit for 20 minutes to soak up the excess water.
Preheat oven to 450 degrees.
Spray a deep baking dish with olive oil spray.
In a large bowl, add bulgar, potatoes, flour, kibbeh spice, cayenne pepper, black pepper, and 2 tsp salt.
knead all ingredients together with your hands until a smooth dough forms, about 3-4 minutes.
Coat your hands with water and using half of the dough mixture, flatten the dough and form an even layer on the bottom of the greased baking dish and set aside.
Stuffing
Preheat a large sautee pan and add 3 tbs olive oil, green pepper, red pepper, onions, ½ tsp salt, ¼ tsp black pepper and sautee for 5 minutes.
Next, add the pine nuts, walnuts, seven spices and sumac and sautee for another 2-3 minutes.
Pour the vegetable mixture in the baking dish, on top of the layer of kibbeh dough.
Then, coat your hands with water and with the remaining kibbeh dough, flatten between your hands and layer over the vegetables, smooth out the layer then with a knife,
Cut kibbeh into diamond or square shapes and drizzle with 3 tbs of olive oil.
Place in the oven and bake for 30 minutes or until golden brown.
Let the kibbeh rest for 15 minutes before serving.
Recipe Source : Here 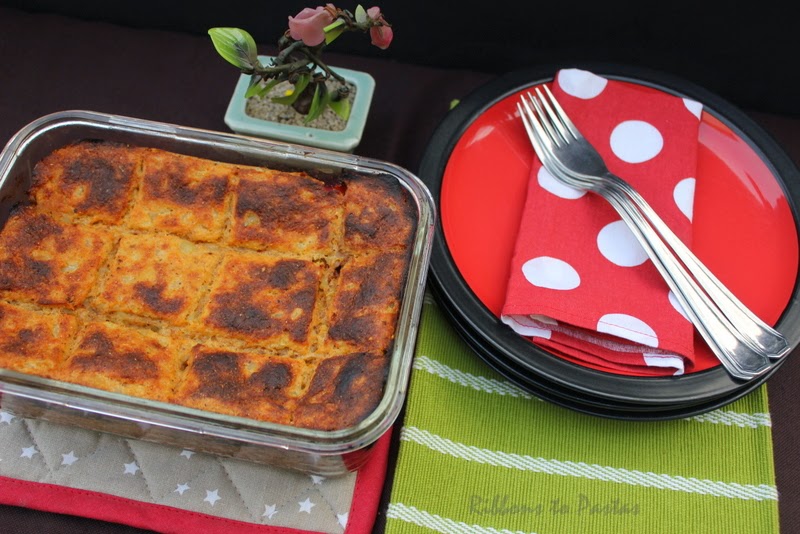 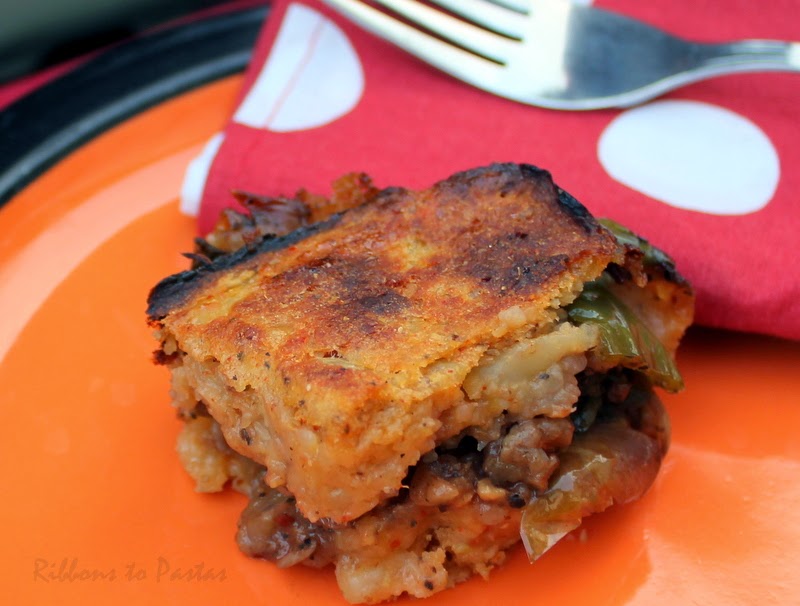 This is the vegetarian version of kibbeh. This version uses potatoes as the binder for the bulgar wheat instead of meat. But, if you like the kibbeh but like the meat filling, you can definitely substitute the sauteed veggies with the traditional kibbeh meat filling. This is great for any time of day , though I served it for dinner. My husband particularly was very happy with this dish as he is an ardent lover of bulgar wheat. The stuffing was very delicious, the walnuts and pine nuts gave it a nutty crunchy taste and i was digging in to find these baked nuts . My dish was a little over baked at the edges, but thank God it did not taste burnt. The Kibbeh reminded me of the Gujju handvo where we add veggies to the flour and bake, every country has their own specialty but yet there are so many similarities. 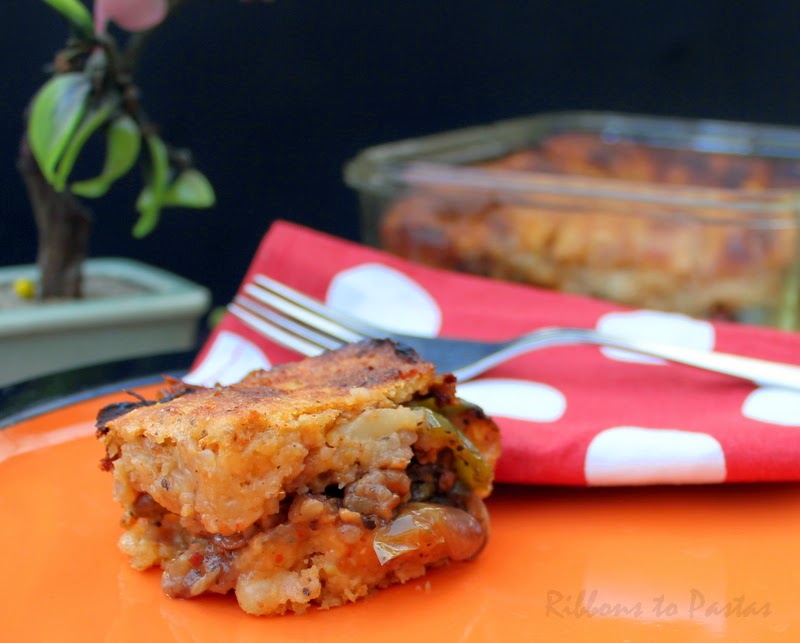