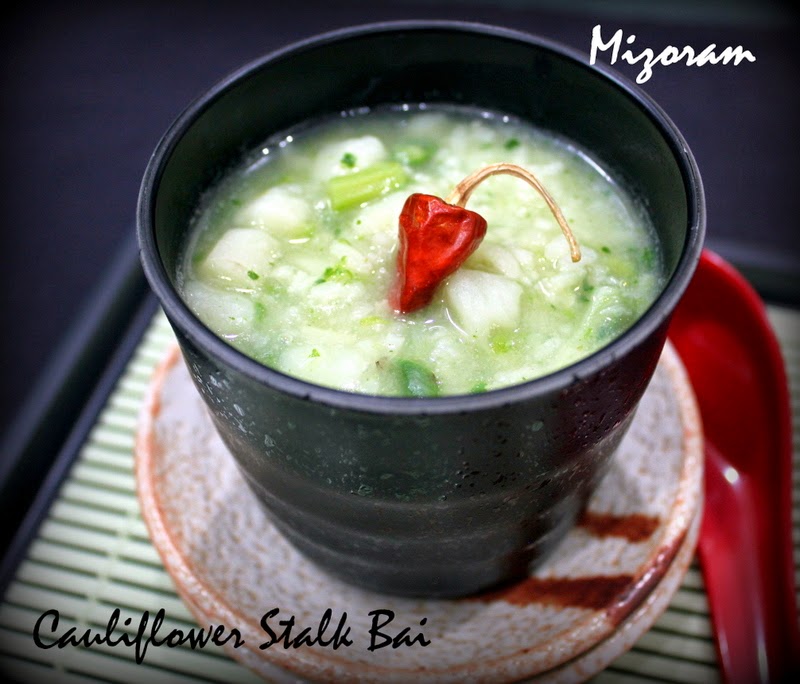 The food of Mizoram has a characteristic blend of Chinese and North Indian cuisine; thereby giving it a distinct flavour and taste. The dishes mostly include non-vegetarian preparations though vegetables are also eaten along with meat.

The local people love to eat fish, mostly cooked or sauteed in mustard oil, which has a distinct flavor. Mizo people like bamboo in their food and also enjoy preparing delicacies made with duck meat.
The North eastern states did give a tough time to all of us, Mizoram was equally challenging.I must have read a number of articles and finally landed on the vegetarian Bai recipe.
Bai. is basically a non-vegetarian dish that is cooked by steaming vegetables and teaming it up with pork, spinach , bamboo shoots and served with rice. I landed on this vegetarian Bai recipe , which included rice in it, thus making it a complete meal.
This to me was more like a soup, quite bland for my taste, but later I added some chilly and soy sauce for the kids and they quite liked it.
To make it even more delicious, you could add some vinegar, and some sauces that you like.

Cauliflower Stalk Bai
Stalks+leaves of one cauliflower, chopped (add a few florets if you’d like)
1 large potato, diced
1 handful sliced beans
1 large chili, sliced
1 tsp cooking soda
1 salt to taste
1 liter water
1 handful rice
Bring the water to boil in a pot.
Add the salt and cooking soda.
Once the frothing has reduced, add the cauliflower stalks and the potatoes.
Stir.
Add chili and beans.
Stir.
Add rice.
Stir. bring to a boil, then reduce heat to a simmer.
Let the pot boil open, stirring it every few minutes.
The dish is done when the rice has absorbed the water, about 15 minutes. 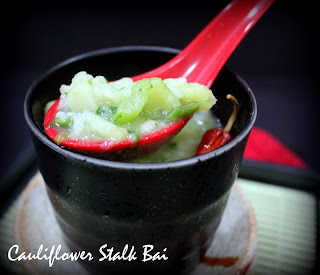